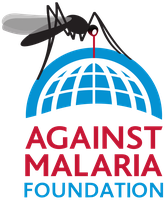 ● Malaria kills half a million people every year and 400 million fall ill every year.

What they do (program details)

● AMF receives and reviews proposals from charities that need bed nets. When a proposal is approved, AMF purchases long-lasting insecticide-treated nets (LLINs) and works with partners who implement distributions and ensure use in areas with endemic malaria.

● After distribution, AMF requires household surveys to be conducted every 6 months for 3 years to understand the condition and usage of the nets that have been distributed.

● AMF publishes detailed pre-distribution and post-distribution reports on its website to which the public has full access.

● 100% of donations received by AMF is used to purchase nets. The cost of nets alone is $2.00 each; the full cost including delivery is estimated at $4.53, or $4.22 excluding in-kind contributions from governments.

Evidence of impact of intervention

● Malaria nets are proven to be effective - saving 5.6 lives each year for every 1000 children protected with LLINs

● In a small-scale study, spot visits found that 70% of nets were being used correctly

Evidence of impact of charity

● According to Givewell, as of August 2018 AMF is expected to sign agreements for distributions totalling $48 million and have discussions about distributions that would cost an additional $65 million. These funds would entirely fund distributions in the DRC, Zambia, Togo, and Uganda as well as other countries.

● AMF has signed an agreement with the DRC Ministry of Health to fund 11.8 million nets for distribution from April to December 2019. This represents 40% of DRC’s long-lasting insecticide treated net (LLIN) need for the 2019 portion of their three-year rolling universal coverage campaign. Remaining uncertainties

○ Reports have shown that mosquitos in certain areas have developed some resistance to the insecticide used in standard nets distributed and that such resistance is growing stronger over time. However, GiveWell notes that there are no high-quality studies on its impact on the nets’ effectiveness and experts generally agree that insecticide treatment nets remain a highly cost-effective intervention after the discount.

○ AMF has also started distributing a new kind of nets - PBO nets - in areas with insecticide resistance. On top of the standard pyrethroid insecticide, PBO nets incorporate piperonyl butoxide, which is a synergist that inhibits the metabolic enzymes that grants immunity in mosquitos. PBO nets were recommended by WHO to combat insecticide resistance in 2017 and a recent study in 2018 shows it generates a 32% reduction in malaria prevalence comparing to standard nets.

○ AMF is currently conducting a study on the topic to learn more and is working with partners to develop new kinds of insecticide treated nets (ITNs).

Giving What We Can review